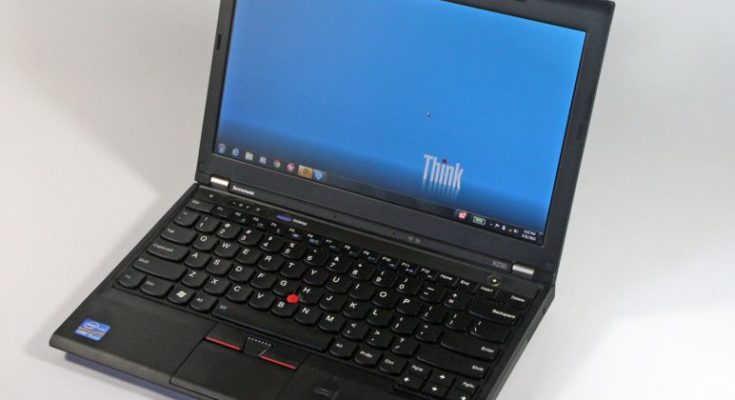 They were built during the last efforts of the trend in building machines that would be useful to people. They are full of things users would want. For example, all the screws on the bottom are the same size. The hard drive bay is easily accessed from the side (one screw and it slides in and out) (note: the hard drive is the extra-thin type – 7mm, so you can’t swap hard drives with many regular laptops – check the sizes though). There is a slot to put a SIM card in to use internet from the SIM card. There is a light that can open and shine down on the keyboard (there is also an optional backlit keyboard which since you get these used now some already have). The F keys are raised higher than the regular keys. There are volume buttons (you don’t press Fn+up arrow). They were made for Win7/Win8, but they work well with any OS, including Linux. They have a great boot, that has a screen that says ‘Press F12 to enter boot menu’ which you can press to decide to boot that time from USB or whatever (you don’t have to search for the key to enter BIOS). They are 12.5 inches (although they aren’t very thin or light as modern laptops are) and around 3 pounds. They are easy to take apart. They all have easy to remove and replace keyboards.

Note that these things I just mentioned are NOT all necessarily true of other Thinkpads, even ones that look just like the x-230, like the x-220 or x-240. Some things might be better or worse on these machines, but there are differences. People have said they like the x-220 keyboard (traditional mechanical non-chiclet type). People have noted that the x-240 keyboard CANNOT be easily replaced (hours to do as opposed to minutes on the x-230).

So all are the same in some things. They all have 12.5 inch screen and good construction. They are all powerful and fast. They all have (only) 720p built-in webcams. For ports, they have 1 audio jack (for headphones), 1 VGA (no HDMI but you can get a VGA to HDMI adapter), 2 USB3s and 2 USB2s (one of the USB 2s has a permanent power connection). NOTE that you can also get a tray for these, where you mount the machine onto the tray, and it has way more ports (and I think battery too) including lots of USBs and HDMI – you can buy these ports on eBay.

Annoying things: They all have the power cord plug in the back of the machine and it sticks straight out (not an angled power plug). The trackpad sucks, and it curves over the edge, so when you have your computer on your lap it can be constantly engaged. However, the trackpad can be turned off and you can use just the trackpoint (red knobby thing in the center of the keyboard) and mouse buttons, or you plug in a USB/bluetooth mouse.

Differences and things to look for when buying one:

– Physical quality. Since they’re from 2008, some are a bit worn out, loose screen hinges, scratches and cosmetic damages, etc. Some are as-new though. It depends on the one you buy.
– Screen. These originally I think all or most came with LCD screens. Many you buy now already have been outfitted with higher quality IPS screens. The resolution is better, and viewing the screen from different angles it’s easier to see the screen better.
– Battery. You can buy batteries for them on Amazon or eBay for like $20 I think, new or used, but it’s nice if you can get a machine with a good battery. There are four types of batteries, from 4 cell to 9 (6 is the most common) that are rated from 8 – 24 hours)
– Some have a rotating screen. It’s up to you whether you want this (or would use it). It means you can rotate the screen around and lay it flat overtop of the keyboard and use the machine like a tablet. These screens have touch sensitivity (although probably not at the level you’re used to from phones). However, note that touch sensitive screens use a bit more power (which may or may not be important to you if you use your machine on battery). The swivel hinge is also going to be more prone to wear and damage than a more sturdy door-type double hinge, which is all some people need.
– Processor. All are fast, but the i7s are a bit faster than the i5s. CPU benchmark for the i5’s is over 4000. For the i7s it’s around 4500.
– RAM. Many come with 4GB of RAM, which is enough for pretty much everything, and depending what you use the computer for you might not even notice if you add more RAM because it won’t be used. The machine holds up to 16GB of RAM (2 8GB cards of DDR3 1.600 MHz).
– Hard drive. Some come with HDDs (there were no SSDs in 2008). But many used ones already have SSDs installed, which are faster (although slightly less secure from a privacy standpoint simply because it’s questionable how well data can actually be totally erased from them, unlike HDDs where you can easily completely overwrite data).

IDEAL: Great like-new machine with good battery that still lasts a couple of hours. i7 processor. Already upgraded to SSD harddrive (480GB or more) or maybe you prefer to buy your own SSD so it’s fresh. 16GB RAM. Has the IPS screen. Has the backlit keyboard.