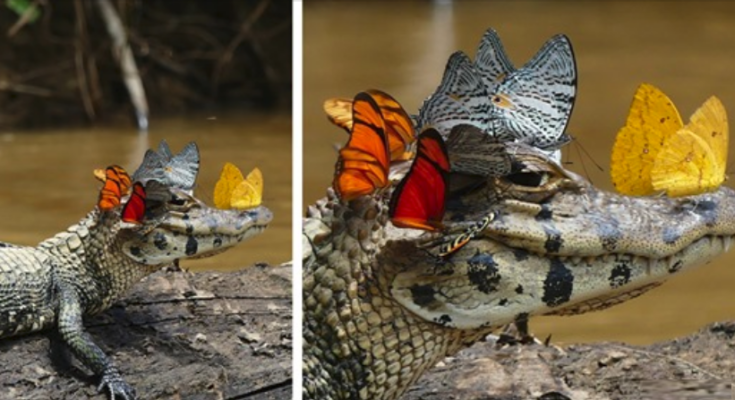 Nature is full of surprises. We keep learning and unearthing facts about the natural world that seem contradictory, strange, and unnatural, at least to our eyes. In reality, nature is much more communal, diverse, and fascinating than we often give it credit for, until someone shows us something like this, where we can begin to understand the interconnectedness of our universe. This caiman and the butterflies are cooperating in a form of community called commensalism – where one animal gains its required nutrients from close proximity to another. The other animal probably doesn’t need these hangers-on but they don’t seem to mind providing for their needs.

In this case, the butterflies require nutrients from salt water but can’t get their wings wet. By perching atop a caiman sunning itself, they can gather the salt they need from its skin. It isn’t known whether this helps the caiman, but it appears the butterflies are relatively safe in its company.

The photo itself is rather adorable, with the butterflies acting as delightful accessories to the caiman’s chic skin pattern. The backward glance of the caiman almost seems flirtatious, as if it knows how adorable it looks with a crown of butterflies. The photo was captured in 2016 as part of a journey through the Amazon by Mark Cowan, who was sent by the University of Michigan’s Herpetology Division to study reptiles and amphibian diversity. This photo garnered Cowan an award from the Royal Society Publishing Photography Competition the same year, a Special Commendation from the Ecology and Environmental Science Category.

The reason behind the award is linked to the grouping of the butterflies atop the caiman. If you study the photo, you’ll see that the butterflies are separated by type, with each group claiming space on the caiman’s head. This rarely seen phenomenon seems to indicate something of importance to the butterflies, although scientists will need to continue to study them in order to fully comprehend what this discovery could mean. Another little known fact that you might want to know if you’re interested in butterflies: a group of them is called a kaleidoscope.