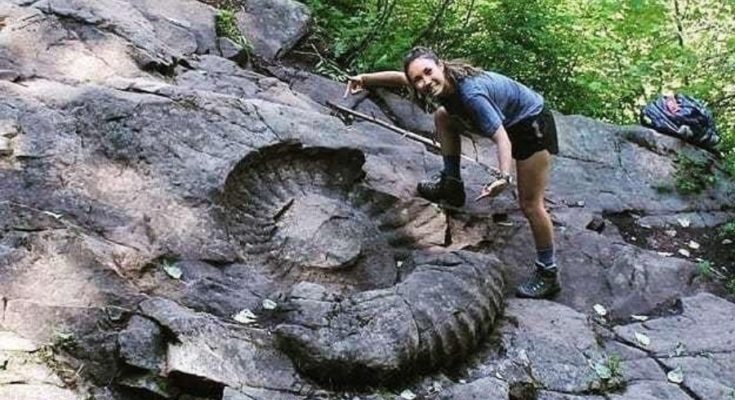 But is it real?

This is a huge Titanites Ammonite, so big it has been named the “fossil truck tire”! And recently, it was found by a team of explorers including the photographer of this pic, Andy Randell, who posted it to the StrataGeoData twitter, with the caption, “Nice find by the team today! Titanites sp., a giant ammonite fossil from south eastern British Columbia!”

Because so many people liked Randell’s pic, it even made it’s way to Snopes for fact-checking if it was actually real!

This giant ammonite fossil was first found in 1947 by British Columbia Geological Survey geologist Chuck Newmarch outside the town of Fernie, B.C., Canada.

When it was reported on by Mountain Culture, they had this to say: “In July 1947, geologists stumbled upon the ammonite fossil while mapping coal seams in Fernie’s Coal Valley. The discovery of a “fossil truck tire” in the sandstone by Coal Creek was reported, and Chuck Newmarch, a geologist with the British Columbia Geological Survey, was sent to investigate. He recognized it as a giant specimen of ammonite, a long-lost relative of the modern-day, shelled nautilus, which is in the cephalopod family that includes the octopus, the squid and the cuttlefish.”

So yes, it’s real, and it’s thought to be the biggest such ammonite fossil in Canada.